‘Whispers of Hope’,  six shocking stories, based on actual events are about the lies, deception and manipulation some parents will go to in order to get their own way, be that for money or to stop a partner seeing their child. Names and some details have been altered but the outcomes in court are true. 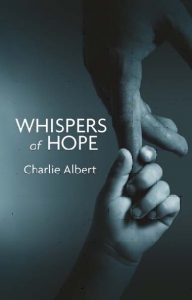 When relationships end there comes a time of transition. It would be nice to think that parents of young children would put the child first and above everything else, after all it is not the child’s fault that the marriage/relationship has come to an end. All too often the child becomes a pawn in the battle between the two parties who are caught up in such bitterness and anger.

‘Whispers of Hope’ has been written by Charlie Albert to inspire those parents out there, to whom all seems lost. They have no money but neither do they have the knowledge of the court system to help them through the Family Court to enable them to get a fair hearing. At last, here is someone who can help and advise them.

We will read about attempted suicide, accusations of rape & domestic violence. These are all lies with the sole purpose of denying one parent the simple and most important thing in their lives, access to their child on arranged days and times. ‘Whispers of Hope’ is both traumatic and inspiring, demonstrating the simple phrase, that where there is a will, there is a way. It is hoped that ‘Whispers of Hope’ will inspire any parent who believes they will never see their child again and who know that accusations against them are not true, and that, finally there is someone out there who can help them.

‘This book has been written to give hope and inspiration to single parents, fighting family law cases.  The stories showcased are not presented in chronological order and names and details have been changed to protect the identities of those involved for obvious reasons.  I hope these stories give comfort and the reassurance that there is light at the end of every tunnel.’

Charlie Albert is not a lawyer; he is a parent who struggled to secure residency of his own son.  After Charlie successfully achieved this through the courts he made the decision to help others in similar situations. Through diligently learning how the family court works, Charlie successfully brought the truth out of warring parents, ultimately giving a parent access to their child.

Charlie has successfully assisted in over 400 people in family law cases. www.amazon.co.uk

Posts related to Whispers of Hope Stories based on actual events

How To Teach Your Child About Money

10 Ways to Create a Strong Bond with your Kids