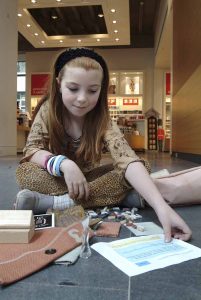 From folding bicycles to electric cars, Londoners have been whizzing around the city in ever more creative ways. Put yourself into the shoes of an inventor and design a cool gadget to keep Londoners on the move in the future. What kind of futuristic transport would you invent? Learn how to make your inventions move using balloons and elastic bands.

One night a young girl dreams of a future where the London she knows has been badly damaged. Follow the little girl as she travels on her bed through a London ravished by pollution. Will her dream change how she feels about protecting the future of London? This story is an adaptation of Chris van Allsberg’s Just A Dream. PERFORMANCES  FREE, drop in

Go back 2000 years and walk the streets of Roman Londinium! Visit the remains of the Roman city wall, the location of a long lost fort and Londinium’s hidden amphitheatre, where brave gladiators and nimble acrobats entertained the raucous crowds, on this interactive tour for families.

Nelly Norris is the inventor of the moveable phone and other fantastic objects but she’s not very happy. She has spent years inventing things a week too late! Hear how Nelly has been losing out to things with the worst names and see if you can help her come up with a new idea? She’s determined to get in there first this time! PERFORMANCES   FREE, drop in

Create a futuristic skyline of London. What will be there and what won’t? Will the London Eye still be on the bank of the Thames? What will join it? You decide in this collaborative art project. Re-create old buildings and invent new ones using a range of recycled materials. WORKSHOP FREE, drop in

Join us for a special event celebrating the release of the new Little Miss Inventor. Little Miss Inventor is intelligent, ingenious and inventive. You’ll get to find out more about her and the inventions she makes for her friends in this special storytelling adventure. The creator of this new delightful book, Adam Hargreaves, will draw your favourite Mr Men character especially for you to take home. There will also be a chance to meet Little Miss Inventor herself and have a photo taken with her. All ticket prices include a copy of the book and a special goodie bag. EVENT

Learn how children’s toys have changed over the years and take inspiration from our playtime gallery. Turn a beloved, classic children’s toy into a robotic version for children in the future.

An alien lands in London after an environmental disaster on her planet hoping to find out what the best bits of London are so that she can use these ideas to rebuild her planet. While she is here, she tells the story of Dinosaur’s and All That Rubbish. Dinosaurs return from extinction and start to turn the planet back to an idyllic space again, to be shared and cared for by everyone. What can we learn from her tale? PERFORMANCES FREE, drop in

Children aged 5-10 today will become the rulers of London in 2050 but what will they look like? With the rise of bio-hacking and of new technologies will you become a cyborg? Use iPads and apps such as Oldify to age yourself and add circuit boards and bionics to your 2050 portrait. WORKSHOP FREE, drop in

Imagine a world in which we travel everywhere in hot air balloons. This was the dream of Italian born Vincenzo Lunardi who operated the first manned balloon flight in London in 1784. Many were in awe and believed that something was falling from heaven… it was the original unidentified flying object. Make Vincenzo’s dream come true, learn the principles of flight and imagine a future London where we travel everywhere by balloon. PERFORMANCES FREE, drop in

At the beginning of the 20th century there were over 50,000 horses transporting people around London each day. In 2017, Londoners made roughly 5.7 million car trips on an average day. Our transport needs are changing and in the future London will have to think about new ways to keep everyone on the move. Get ahead of the game and design new modes of transport to whizz around London WORKSHOP FREE, drop in

Join Debbie Guneratne in this interactive storytelling session and find out how fossils, piles of gold and shards of glass can create story landscapes of the future. This time travel fantasy story uses objects from the museum’s collection to help the heroes of the story predict what will await them as they leap into the future! PERFORMANCES FREE, drop in

Posts related to Easter at The Museum of London