PRIMIGI, the historic brand for children’s shoes, was founded in Italy in 1976, establishing itself on the market with its first steps shoes. The brand immediately became synonymous with technological know-how, scrupulously selected materials and Italian style. It was an instant success: We have asked some of our readers to test drive Primigi shoes and here are the results: 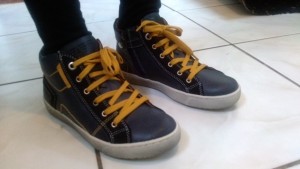 Rob enjoyed receiving his Zach boots and trying them on. He liked the design of the boots particularly the fact that they had a zip up one side. Mum found this incredibly useful as busy parents always in a rush. The laces can be kept laced up all the time and your child could do up the zip himself.
As Rob has not learned to tie up his laces (as yet) so he thought it cool: as everyone would think that he had learned to tie up his laces!
He found the boots very comfortable – wearing them in the house and outside. He liked the faded effect around the edging at the bottom of the boot. They looked sporty. Rob very much liked the fact that he had a choice of colour for the laces: navy or yellow. He chose yellow as he really likes this colour.
Rob reckons he could wear them for everyday use and for parties too. Shoe shopping with mum they compared the Primigi boots with what he could find in the shops and he liked the fact that they were fashionable but not too fashionable. The logo is there but discreetly hidden – he is not very keen on huge logos. He prefers his logos to be hidden if at all possible.
To check them out properly to see if they did fit him well he wore them to a ‘climbing party’ in an indoor centre (he is nearly nine years old). He was able to play sport in them as he likes football. He found the leather of the boots to be very soft. 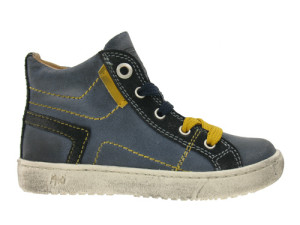 Overall the Primigi boots are extremely good value. The leather is soft and excellently stitched. The careful design is evident too, creating a strong and supple pair of boots. The footwear is very versatile and can be used for many types of activity both indoors and outdoors. The boots are a good wardrobe staple providing an all round shoe/boot for all weathers. Paying slightly more for a pair of boots which will last a long time is better value in the end.

Imogen was also bought a pair Ariel Primigi boots. They are silver boots with a flower pattern all over them. Imogen was over the moon with these boots as they seemed (to her) very grown up and fashionable.

Imogen wore the boots with every outfit imaginable. In the photo when she had first received them she tried them on with her jeans.
She could not believe how grown up she felt! These boots were laced up at the front but had a zip to one side for getting them on and off very easily. Imogen thought they was very soft and loved the colour of them. She liked them as they were tomboyish and girly at the same time. 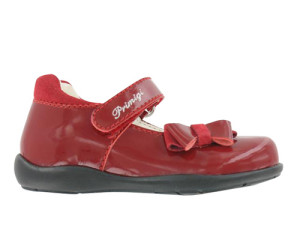 Just as she had liked the red leather patent shoes she was very taken by these boots. Imogen could not wait to show them off to everyone. They could be worn all the time and for every sort of activity. The quality of the boot was extremely high and they were very well designed. Imogen’s parents knew she would get a lot of wear out of them.

The boots are a continental size 27 (UK size 9) and again fitted her perfectly.

Imogen was delighted when she opened the Primigi box and saw the red patent leather Yasmine shoes. They fitted her like a glove! Imogen absolutely adores trying on shoes and dressing up and she loved the bow on the side of each shoe. Imogen takes a size 27 (UK size 9)

The feel of the shoe was gorgeous and felt very soft. They were ideal shoes for going out shopping or to parties. Imogen could not wait to show them off to her friends! When she did they were all jealous. She knew that they would go with lots of her outfits – dresses, skirts, jeans, everything.

Imogen was very impressed that the shoes came from Italy and liked where the name went on the edge of the strap on the side of the shoe. The shoes, themselves, felt totally comfortable. They seemed very grown up. Imogen said that she did not want to take them off and that she wanted to go to bed with them on!

Imogen did wear them to all sorts of events: shopping, parties, in the house, out on the street. She would have continued to wear them but she wanted to keep them for best so they would not get scuffed and spoilt. Her parents were very pleased that she liked them so much and they were tempted to get her another pair – one pair for wearing around the house/the street and one pair for best.

Primigi Shoes for those First Steps