DRESSED TO IMPRESS: FASHION IN THE 18th CENTURY 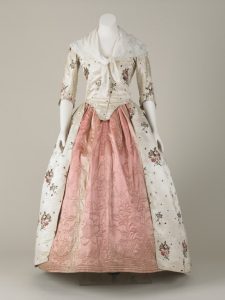 A stunning collection of 18th century fashion items is to go on display at the Walker Art Gallery, Liverpool, in August 2018 to spring 2020.

Showcasing 13 male and female costumes as well as accessories, Dressed to Impress: Fashion in the Eighteenth Century will highlight changing attitudes towards body shapes as well as documenting the social climate of the time.

“These beautiful pieces demonstrate how fashion can be an important vehicle for exploring everyday life in past centuries.”

The clothes in the display are typical of the main fashionable styles worn by the middle classes, known at that time as ‘the 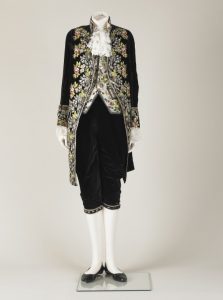 middling sort’. These people were neither rich nor poor, and often wanted to improve their social standing. Examples of their clothes to be seen in the display include a pair of ‘stays’ (a laced corset), formal female dresses, and elaborately embroidered men’s waistcoats with hand cut sequins known as ‘spangles’.

The display will also include a number of important accessories, such as a pair of women’s shoes with overshoes for outdoor wear to protect the feet against the unsanitary conditions in the streets. The accessories on display include two men’s wallets, one of which belonged to John Bridge, a Liverpool merchant heavily involved in the transatlantic slave trade. Money acquired from his activities would have been kept in this wallet, which is embossed with Bridge’s name in gold lettering.

As well as containing reminders of Liverpool’s past involvement in the transatlantic slave trade, the display provides some fascinating insights into how clothing helped to foster idealised body shaping, both for women and men.

The display will include a rare pair of men’s stockings – one of just a few surviving pairs remaining in the UK– with padding designed to accentuate the calf area, from an era when it was deemed important for men to have shapely calves.

This will be the first time that the stockings, made from knitted silk and lambs wool, are displayed at the Walker Art Gallery, although they have previously been shown in museums in New York and Los Angeles.

There will also be two videos on show in the gallery, depicting how 18th-century men and women were dressed by their servants.