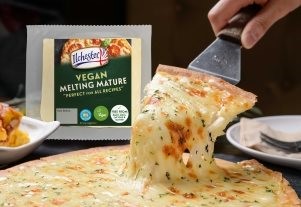 Ilchester, the number one British flavoured cheese supplier, is kickstarting Veganuary 2022 with a new listing in Sainsbury’s for its newest plant-based cheeze, the Ilchester Vegan Melting Mature block, which is being described by consumers as “the best melting vegan cheeze in the market”.

Lisa Harrison, Senior Brand Manager for Ilchester, said: “This is a fantastic way to start 2022 and to celebrate Veganuary with a listing for one of our newest cheeses, our Ilchester Vegan Melting Mature which only launched in July 2021.

“To secure another listing for the Melting Mature is really the icing on the cake as we want as many people as possible who are keen to try a flexitarian, vegan or vegetarian diet to have access to our plant-based cheese alternatives.

“The demand for vegan food isn’t shown any signs of slowing down as the pandemic has really focused people’s thoughts on eating healthy and strengthening their immune systems.

“Figures for 2020 showed that there was a 40% increase in people following a vegan diet in Britain, up from 1.1 million to 1.5 million, equivalent to three percent of the population*.”

Rosie Sibthorp, Senior FreeFrom Buyer at Sainsbury’s, said: “We have seen demand for plant-based alternatives to dairy products rocket over the last few years and we are keen to offer our customers a wide choice of vegan cheezes. Applewood Vegan Block and Applewood Vegan Slices have proved to be really popular, and we are confident that the Ilchester Vegan Melting Mature Block will go down with our customers.”

The Ilchester Vegan Melting Mature is THE mature vegan cheddar cheeze known for sharing the same meltability factor as dairy cheddar cheeses, something that vegans have often said lacks in other plant-based cheezes.

It is the perfect cheezy addition to vegan burgers, melts well as cheese on toast or Welsh rarebit toasties and of course is the perfect cheese for mac ‘n’ cheeze. As a quick snack, Melting Mature is particularly tasty on crackers with a fruity chutney.

Ilchester, which has been making cheese in Somerset since 1962, is part of the Norseland portfolio of dairy and vegan cheezes, which includes the award-winning Applewood Vegan and Mexicana Vegan cheezes.

Applewood Vegan is now the number two vegan cheeze brand in the UK and much of its success is down to the fact that it melts like a dairy cheese. This winning formula has been applied to the Ilchester Vegan Blue and the Ilchester Vegan Melting Mature to create cheezes with the perfect melting “M Factor”. The cheezes are coconut oil-based which is what makes it melt so well.

The Ilchester Melting Mature Block will be available from 9 January in 459 Sainsbury’s stores and its RRP is £2.35.