There is Sense in the Sandpit:
The Christmas market in Freiburg

We have reviewed this area of Germany to help you create a special treat this Christmas time with our magical trip to Europa-Park in Germany. Germany’s largest theme park combines heart-warming traditions such as carol singing, ice skating, Christmas markets – with rollercoaster exhilaration.

We arrived to the snow covered trees and were greeted by the sights a sparklingly lit Christmas setting with the thousands of glittering lights and decorations. The aromas that meets you are the spiced mulled wine and delicious festive foods. 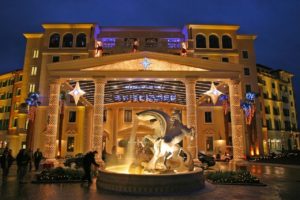 We stayed at the 4-STAR Hotel ‘Colosseo’ at Europa-Park. This charmingly Italy themed hotel is in the style of ancient Rome. We enjoyed the relaxed atmosphere of the beautiful hotel rooms with cosy log fires. You have a choice of food in the Italian restaurants, bars and cafés. We tried restaurant ‘Antica Roma’ and thoroughly enjoyed the fresh and tastey dishes. The spa area had cosy sauna and pool. As well the luxury hotels Europa Park also have cowboy themed Camp Resort & Camping available over the summer.

Children can Breakfast with cartoon character Ed Euromaus and his friends every morning. The Hotel also has a kids corner in the lobby which is a paradise for little climbers. The perfect meeting point for all kids who want to roam around. A secret passage through the climbing nets goes upwards and a slide carries the kids back to the ground floor. 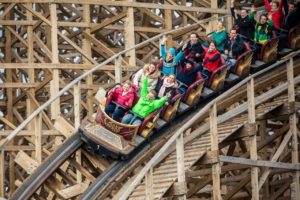 A wide range of shows offer high-class entertainment at Germany’s largest theme park. Dancers, artists, and clowns mesmerize audiences at the magical Circus Revue. The musical play ‘A Musical Christmas Market’ at the Globe Theatre entertains the whole family. The ice show ‘Surpr’Ice with the Son of Santa’ and the popular children’s musical ‘I want… Christmas Chaos’ are sure to delight attendees. The ‘Winter Startlight Parade’ slowly makes its way through Europa-Park, lighting up spectators’ faces with beaming smiles along the way. A new acrobatics show at the Mercedes-Benz Hall, as well as the light show ‘Luna Magica’, promise colourful show highlights. Visitors can meet Europa-Park’s mascot, Ed Euromaus, in his mobile home in the 14th European themed area, Ireland, and can go on to discover all the secrets of the new indoor play area during the show ‘The Secrets of Limerick Castle’.

To see off the year in style Europa-Park hosts a glittering New Year’s party where guests can celebrate the start of 2017 between illuminated rollercoasters and sparkling winter attractions.

The ‘Cirque d’Europe’ dinner show from 17th November 2016 to 11th February 2017 is another highlight. A unique combination of artistic performances, live music, comedy, and an exquisite menu created by 2* Michelin chef Peter Hagen from the Ammolite – The Lighthouse Restaurant fills an evening with truly unforgettable moments in the decadent surroundings of the Teatro dell’Arte. 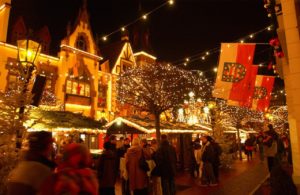 The cosy atmosphere, melodic carols and delicious scents of the traditional Christmas Market in the Historic Balthasar Castle Park invites visitors to go for a winter’s stroll. Age-old profession such as book makers and a goldsmiths feature in several tents in the German themed area. Black Forest clocks, clay sculptures, and much more can also be discovered.

When night time falls and Europa-Park is bathed in the light of the moon, torches are lit and log fires are stirred that illuminate the paths and stalls. The Christmas Market in the German Alley offers culinary delights such as sausage and cheese specialities, fine chocolates, and spirits from local producers hailing from the length and breadth of Europe. 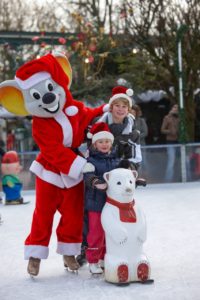 A highlight is the daily ‘Winter Starlight Parade’ which visitors can follow through the Park. Explore the cosy Christmas Market in the German Alley, with its quaint wooden stalls offering seasonal gifts, crafts, and decorations, all set against the backdrop of the Balthasar Castle and when night time falls, torches are lit and log fires illuminate the paths and stalls.

In addition to Europa-Park’s award winning rides and rollercoasters, there are numerous seasonal attractions*. You can ride on bob-ski or go ice skating on the lake at ‘Scandinavia’. Head to ‘Ireland’, where children can enjoy the new indoor play area and ‘The Secrets of Limerick Castle’ show (see website for show times) and Europa-Park’s mascot, Ed Euromaus can be found here in his cosy caravan. A ride on the 55-meter-high ‘Bellevue’ big wheel in the Portuguese themed area provides a wonderful view over the whole of Europa-Park’s dazzling winter wonderland and if you want to deliver a letter to Santa, head over to his office in Europa-Park’s Russian themed area.

We had a warm, cheering stay with a fun Christmas atmosphere The Christmas season at Germany’s largest theme park runs from 26th November 2016 to 8th January 2017 (except 24th/25th December); the park completes the season with a New Year weekend finale on the 14th and 15th January 2017.

This was a great start to Christmas A magical location who couldn’t have been more welcoming. This would be a treat for the whole family. Absolutely recommend for now and later in the year! We then caught a train to the town of Freiburg to continue our German Christmas Market adventure!

We travelled from London Gatwick Airport to EuroAirport Basel-Mulhouse and took the Shuttle to Europa-Park (duration approx. 1 hour) 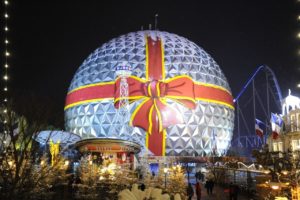 Posts related to Christmas Thrills and Traditions at Europa-Park, Germany

The Christmas market in Freiburg