There is a wide range of other Halloween activities taking place on the Isle of Wight over half-term, including Wizard Week and Halloween Fright Night at the Isle of Wight Steam Railway, while Carisbrooke Castle turns into a spooky castle and there will be some ghostly goings on at the Needles during half-term.  visitisleofwight.co.uk 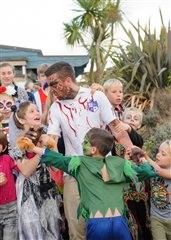 Discover the fantasy and folklore of Halloween at Beaulieu this October half-term, 21st – 29th, with amazing seasonal activities and traditional fun and games for all the. See the harvest festival-themed decorations in Palace House. Head to the Victorian Kitchen to watch the cook bake soul cakes. There will be arts and crafts activities All Hallows trail around the Beaulieu attraction, discovering fascinating seasonal facts. Search for the spiders that are hiding across the attraction.Magical goings-on, explore the secluded Mill Pond Walk to see fairy doors belonging to Beaulieu’s smallest residents, plus tree carvings of the mythical griffin, many-headed serpent and the green man of the woods.

Fireworks Spectacular on Saturday 28th October, where this year’s theme will be Beaulieu does Broadway. www.beaulieu.co.uk/events. 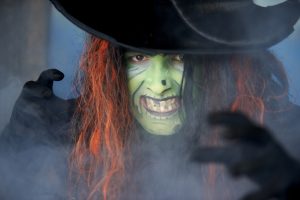 Drusillas Park Halloween Shriek Week  Saturday 21st – Sunday 29th October If you are bored of all your local haunts, stake out the fun at Drusillas Park over the Halloween period. We’ve conjured up some fang-tastically spooky surprises to keep your little horrors half term happy

Hello Kitty Tuesday 24th October Hello Kitty will return to her home at Drusillas on 20 dates during the year! Visit her in her beautiful themed house and have a souvenir photo taken with the cutest girl herself. Meet and greet opportunities will operate at intervals throughout the day.

Scooby-Doo Wednesday 25th October Crime solving Scooby-Doo will be coming to meet budding detectives at various intervals throughout the day. Come and investigate with the cowardly hero but don’t forget the Scooby snacks! For more information please telephone 01323 874100 or visit the website at www.drusillas.co.uk

Pick up a free pumpkin at Willows Activity Farm – 21-29 October Willows Activity Farm St Albans is hosting its annual Pumpkin Festival where families will be able to pick up a free pumpkin, which they can carve out in the Willows Carving Cavern. There will be a programme of Pumpkin-tastic activities including pumpkin carving and arts and crafts, Pumpkin Olympics and Pumpkin Show. Contact details: willowsactivityfarm.com; Tel: 0870 129 9718

Verulamium Musuem is a fantastic place to find out about everyday Roman life. Throughout half-term, there is events taking place at the museum for kids, including Meet a Roman Soldier (21 October), Crafts in the Colonnade (23 and 24 October), Roman Paper Engineering (25 October), Museum and Explorers (26 October).

But the big event for Halloween is Shadow Puppet Roman Myths and Legends on Saturday 28 October at 5.30pm and 6.30pm. Visitors can soak up the atmosphere of Verulamium Museum at dusk with family-friendly puppet show performances as part of the national Museums at Night celebrations.  stalbansmuseums.org.uk

When the sun sets, walk with the spirits St Albans City Tour Guides will be hosting Ghost and Ghouls tours every day between 25 and 31 October, excluding 29 October. On Halloween itself, there will be four tours departing at 7pm, two at 7.30pm and 8pm.The tour guides take guests around the medieval cobbled streets of the city to the many centuries-old buildings where ghosts have been spotted. stalbanstourguides.co.uk

Brick or Treat is back at the LEGOLAND Windsor Resort this October, featuring spectacular all new LEGO® NINJAGO® themed fireworks to celebrate the opening of LEGO® NINJAGO® World.

Little ones can get stuck into a range of spooky activities from a LEGO Skeleton Big Build to building their own LEGO and DUPLO® pumpkins for the pumpkin patch. There will be a special spooky takeover of the DUPLO Puppet Theatre shows, as well as the chance to meet everyone’s favourite costume characters Frankie, the friendly monster, Lord Vampyre and Orange Brick. And it wouldn’t be Brick or Treat without a fancy dress competition and the chance to see the world’s smallest LEGO pumpkin patch in Miniland!

On 21/22 and 27/28 October the skies will light up with a truly spectacular fireworks display, inspired by the awesome world of LEGO® NINJAGO®. Guests can expect magnificent pyrotechnics perfectly choreographed to a dynamic soundtrack in a truly memorable display. Plus don’t forget your LEGO 3D glasses to see the fireworks explode into thousands of tiny LEGO bricks*! 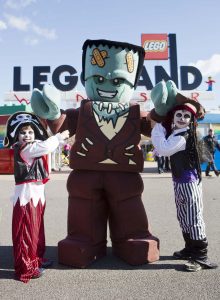 There will be Mischief and Mayhem for Halloween at Lee Valley Park Farms during October half term, with lots of family friendly fun and frightening activities! Children can have a go at carving in the pumpkin patch, venture in the spooky mansion and join in the trick or treat trail.

The fun also includes spooky face painting – available at a small fee, plus ‘frightening food’ and bizarre beverages from the Bumblebee Café. In addition all the 300 resident animals, including cuddly sheep, giant rabbits, rare breed pigs, long-necked llamas and Meerkats, will be there to greet visitors. Families can also enjoy the farm’s daily entertainment such as a critter show, with chinchillas and Bearded Dragons, and sample the adventure activities with play areas and toboggan rides. 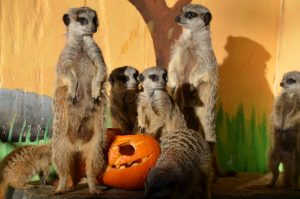 Visitors are invited to dress up for the occasion in their most fearsome fancy dress costumes, so dig out your best witch, ghost, zombie or Dracula outfit and head down for a Fright Night to remember. Prizes will be awarded for the best costumes.

Family Fright Night features a hair-raising array of activities, including petrifying pumpkin carving, creepy cupcake decorating, fantastic face painting, plus a spine-tingling trick or treat trail around the Aquarium. This chilling night will culminate with a tremendously awesome Fright Night Show. £5 for adults and £12 for children, under 3’s go free. www.national-aquarium.co.uk 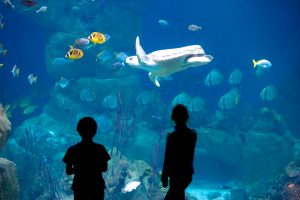 This October, Sea Life Brighton invites thrill seekers and brave souls to discover the scary creatures hidden in its Fear Forest October 14 to 29. As an added half term treat, kids in Halloween costumes will receive free entry!

Taking place in its Rainforest Adventure area, Sea Life Brighton will showcase a range of activities for something a little different this half term, revealing the tricks and treats of the extraordinary creatures in each tank.

Freaky face painting will transform children into their favourite spooky friends, available from 14 to 26 October. Guests are invited to take part in the ‘Yucky Dip’ in the gift shop to win a scary trick or an exciting treat including pop badges, sweets and VIP feeding experiences.  www.visitsealife.com/brighton or call 01273 604234. 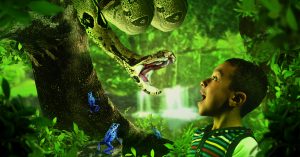