Research reveals that almost two thirds (65%) of UK Mums experience a ‘witching hour’ with their children (aged 0 – 2), with 81% claiming this time is their hardest and most testing as a parent.

The survey by C&G baby club, conducted to explore the ‘witching hour’ – crankiness in babies – revealed that almost a half of mums (46%) say the witching hour is a daily phenomenon with nearly a quarter (24%) identifying 5-6pm as the peak time for it to occur. The witching hour lasts approximately 46 minutes and when it comes to the little ones, every day sees a spot of the grumps.

The main triggers for the witching hour were identified as children needing sleep or being over-tired (56%), needing sleep but not yet tired enough for bed (42%), wanting attention (28%) and being frustrated by something else (26%). Typically seen during this witching hour include whining/whinging (62%); being irritable (62%); crying (52%) and not wanting to be put down (43%). 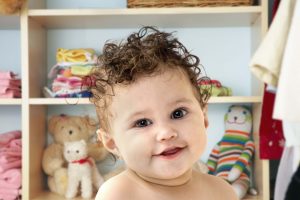 The research goes on to explore the current techniques mums use to placate their grumpy children in a bid for a happier, relaxed household. It found that more than a quarter (27%) give them a dummy, while 19% sing to them. A fifth (21%) put them in front of the television and over one in ten (11%) admit handing over their tablet or smartphone. However, 89% of mums revealed they would be interested in help and inspiration on how to keep their baby/toddler happy during the witching hour.

In response to this, C&G baby club have re-released a ground-breaking track called The Happy Song – the first scientifically tested song created to make babies happy – which had over eight million listens on original release and is still popular now.

Dr Caspar Addyman said: “It’s surprising to see how universal the experience of the ‘witching hour’ is and how challenging it is for both mums and babies. As found in the research, it’s thought to be caused by overtiredness and soothing and distraction can help, which is one of the reasons why the Happy Song by C&G baby club could work. The Happy Song – brought together by a team of scientists, parents and Imogen Heap, and created using a mixture of sounds, motifs and interactive lyrics – is tested to make babies happy. It was originally made with anytime of the day in mind, but this new research highlights the Witching hour as a perfect time to put it into practice. Laughter can sometimes be powerful enough to reinvigorate even the weariest parent and baby alike, so inspiring happiness and laughter might help combat this common difficult time in the day for parents.”

The behaviour of babies during the witching hour can be known to take its toll on the parents of the nation. 66% of the mums surveyed admit to getting upset as a result of their child’s witching hour, and over one in ten (11%) say they have shed tears – which is where C&G baby club’s commission of The Happy Song may lend a helping hand.

34% reveal the witching hour as one of the more challenging moments for adults, ahead of school exams, a job interview, arguments with their partner, a driving test or an important presentation at work. More than half of mums have had to leave somewhere due to witching hour crankiness – 29% have left a supermarket and 8% have left a wedding.

For more information on The Happy Song, head to www.netmums.com/baby/your-happy-baby or www.soundofhappy.com

Are your baby’s cries persistent and left unexplained?

10 Ways to Create a Strong Bond with your Kids