Are you becoming a ‘Dermaparentologist’?
Budding archaeologists welcome at Lee Valley Park Farms!

This August the National Army Museum focus’s on India’s independence through talks, a books club and a late opening exploring artistic responses to India’s journey to independence. Children and families can come and enjoy our construction challenge whilst we embark on our second walking tour with Brompton Cemetary. Whatever your interest or age there is something for you to enjoy at the National Army Museum. 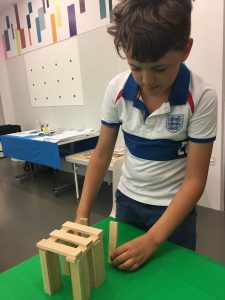 Until 19 November Free Explore why artists and soldiers have painted scenes of conflict, in our first temporary exhibition at the new museum. Artists and soldiers have painted scenes of conflict for many reasons – to create records, report news or commemorate events. But above all, war paintings are personal perspectives on war and its vast impact on people and places. War Paint features over 130 paintings and objects exploring the complex relationship between war and the men and women who map, record, celebrate and document it. www.nam.ac.uk

22 July – 3 September Free This summer, discover engineering techniques and have a go at our construction challenge. This is a construction challenge with a difference. We’ll be transforming our spaces into different environments to explore how the army adapts to its surroundings. From the jungle to the North Pole, use our stack of wooden construction planks to create a structure that won’t topple over. Drop in anytime between 10:15am – 4pm to take part in a free session, no booking is required.

The World Wars and India’s independence

4 August, 11.30am Free Lionel Knight looks at how the two World Wars influenced the development of the Indian National Movement. During the first half of the 20th century, Indians increasingly expected self-government to be granted in return for their contributions to the World Wars. This was also a time when the legitimacy of British rule was being called into question by the Indian National Movement. Lionel Knight will explore how the World Wars changed the relationship between Britain and India, and how they led to the breaking of Britain’s ‘will to rule’. Lionel Knight is the author of Britain in India, 1858-1947. He is the retired Head of History and Politics at the City of London School.

6, 13, 20, and 27 August, 2.30pm Free Join us for a free 30-minute tour of our temporary exhibition War Paint. Artists paint places of conflict for many reasons – recording locations, reporting news and commemorating events. But these images also offer personal perspectives on war and its impact on land and people. During this tour, we’ll discuss the purposes behind painting war and highlight some of the techniques used to paint during conflict.

7 August, 2.00pm Free Get help from our staff identifying your artefacts, and learn how to research your family history. Have you had some medals passed down to you and want to know how to care for them? Are you struggling to identify a relative’s regiment from a photograph? Do you want to start researching your family history? Museum staff will be on hand to answer your questions at our free identification workshop.

9 August, 6.30pm Free An evening exploring artistic responses to India’s journey to independence from British rule. This year is the 70th anniversary of the Partition of India and we’re looking at its impact on contemporary and modern society through artistic responses. Join us for a special evening including live performances, poetry recitals, creative workshops and delicious Indian food. We’ll be showcasing our extensive Indian Army collection through guided tours of the museum and bringing objects out of storage for a unique viewing opportunity.

Walking Tour: Beyond the battlefield

War Paint guest tour: Michael Crossen
23 August, 6.30pm
£12.00, £9.00 concessions
War artist Michael Crossan will give a guided tour of our War Paint exhibition, in which his work is featured. During this special one-hour tour, Michael Crossan will take you round the exhibition and discuss what it’s like to be a war artist. Learn about how his experience in the army has influenced his artwork and practice over time. Michael served in West Berlin and the UK. Just a few years ago he was living in a hostel for homeless veterans in East London. www.nam.ac.uk

Refugees from the Partition of India

25 August, 11.30am Free Are refugees’ experiences valuable to the story of India’s road to independence? 2017 is the 70th anniversary of the Partition of India. A time of huge upheaval, leading to the mass migration of over 13 million people. Travelling for hundreds of miles across borders, leaving their homes and most of their belongings behind, refugees were split by religion and resettled in new countries. To mark the anniversary, we’re bringing together a panel of experts to discuss the impact that refugees have had on the story of the Partition of India. Panelists: Canon Michael Roden, Director of the Partition History Project Professor Sarah Ansari, Professor of History at Royal Holloway, London Professor Bashabi Fraser, Director of the Scottish Centre of Tagore Studies (ScoTs) at Edinburgh Napier University Speakers will have 8-10 minutes to share their views. We will then open up the discussion to the audience.

30 August, 7.00pm £5.00 Be inspired by our War Paint exhibition by getting creative in this hands-on workshop using ribbons and medals. We’ll begin with a discussion about ribbons and medals in the War Paint exhibition, exploring their historical and political context, and introduce how they are designed and made. Then we’ll have a go at using some of the techniques, such as cutting and stitching, to create a medal ribbon inspired by those on display in the War Paint exhibition. All levels are welcome. Materials will be provided. The workshop runs from 7pm to 8.30pm.

30 August, 7.00pm Free Join us once a month for an evening of discussion and debate about books relating to the British Army. This month we will be discussing Yasmin Khan’s book The Great Partition: The Making of India and Pakistan. August’s Book of the Month examines the context, execution, and aftermath of Partition, weaving together local politics and ordinary lives with the larger political forces at play. Come along and meet new people at an entertaining and informative evening of lively discussion. Explore our book of the month and unpack current issues, historical events and popular fiction through recent book releases related to the British Army. The Book Club meets on the last Wednesday of the month, from 7pm to 8pm. Refreshments are available from 6.30pm.

Michael Morpurgo: A Lifetime in Stories