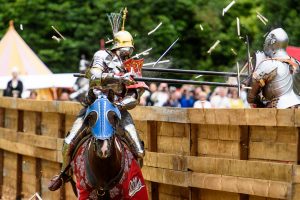 Lances will shatter and emotions will run high this July as jousters from around the world vie to be named the victor of Arundel Castle’s Jousting and Medieval Tournament: Champion of Champions edition.

The unique six-day spectacular, taking place from 25-30 July, promises more tilt-rail drama than ever before as the Jousting and Medieval Tournament celebrates its tenth outing at the ancient Castle.

The field of competitors will be made up of the highest scoring individual jousters from years gone by – meaning there will be no team competition in 2018.  But with solo glory on the line, visitors can expect the fiercest competition to date!

Atop specially trained steeds, knights clad in full plate armour will once again compete for the Order of Arundel. The triumphant knight will also secure his place in the history books as the finest jouster to contend at Arundel Castle.

Set in the shadow of the mighty Castle, the Jousting and Medieval Tournament is the longest event of its kind in the world. Drawing visitors from across the UK and overseas, it is an unmissable event that has earned its status as the highlight of the Castle’s events calendar.

Castle Manager Stephen Manion comments: “This year marks a number of significant milestones at Arundel Castle: it is the 950th anniversary of the Castle’s initial construction, a decade since the unveiling of The Collector Earl’s Gardens and, of course, the tenth year of hosting the fantastic Jousting and Medieval Tournament. I have no doubt in my mind that this year’s event will be the biggest and best to date!

“The tournament is unique, testing the physical and mental prowess of each competing knight, as well as their chivalry, horsemanship and stamina. We are delighted to be hosting a ‘Champion of Champions’ edition in celebration of its tenth outing at the Castle – our visitors are in for a real treat. I look forward to seeing the excitement on the faces of our visitors this July, as they cheer their chosen knight to victory.”

Alongside the action at the tilt-rail, Arundel Castle plays host to a medieval foot tournament across the six days, where competitors are pitted against each other in a show of combat strength.

With breath-taking jousts, stunning combat displays, craft showcases and a host of cookery, costume and weaponry demonstrations, the Jousting and Medieval Tournament has plenty to excite visitors of all ages.

Arundel Castle is currently closed to visitors and will re-open on Sunday 30 March 2018. For more information on Arundel Castle, please visit www.arundelcastle.org.

Posts related to Who will be crowned the Champion of Champions this summer at Arundel Castle?