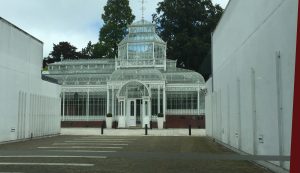 When I visited Horniman Museum and Gardens www.horniman.ac.uk in Forest Hill, south London on a warm Wednesday in June, it was awash with under 5s. There was a playgroup picnic on the grass with children slathered in sun cream, wearing their sun hats, while on the playground toddlers were experimenting with outdoor musical instruments.

Parents were just finishing Busy Bees, a free session that takes place just about every Tuesday and Wednesday morning in term time introducing children to simple art and craft, songs and play and folk tales from around the world.

I was there to see the new World Gallery launched this summer with over 3000 objects – some new, some from existing collections and many hidden away for many years.

Exhibits include Libyan refugee boats, native American tomahawks and sharks’ teeth reflecting people’s lives and cultures from around the globe but also testament to contemporary issues such as climate change, displacement and migration.

Like other museums, Horniman has a school holiday programme for families but instead of seeing them only as audiences for 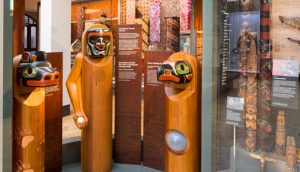 the wonderful exhibits from faraway continents, it has also engaged with them to make the World Gallery more accessible to parents with young children and those with limited English and so the World Gallery is not just about looking and reading, it is full of interactive exhibits too. Children can touch a bear paw on a totem pole and listen to a story, be a trader in a Nigerian market, smell potions used as cures by healers in the Himalayas and write or draw a message on a rag to hang on a Celtic Cloutie tree.

Horniman Museum was founded by Frederick John Horniman who said he wanted to ‘bring the world to Forest Hill’. At that time Forest Hill was a prosperous suburb for the burgeoning middle classes, with newly built Victorian villas. Now it is home to many diverse ethnic groups and the museum’s mission these days is to appeal to people of all ages and to try to reflect as many cultures as possible so the World Gallery also has video screens with representatives from local communities, recent arrivals, families rooted in the area for generations, with learning disabilities and deaf BSL signers talking about objects which have special significance for them.

Julia Cort, Community Learning Manager, commented on the success of the project: ‘In the past museums were seen very much as custodians, allowing the public access to treasures. Now we are collaborators. Every single object has been made by someone, used by someone or is important to someone. They help us to answer big questions: What is a life well lived? What is it we hold dear?’

Horniman Museum and Gardens won the Kids in Museums’ Family Friendly Museum Award in 2013. Here are the eleven museums shortlisted for this year’s award:

The winner will be announced in October. https://kidsinmuseums.org.uk