A big, brilliant, fun-filled festive extravaganza with songs, snow and of course Santa. It’s Christmas Eve, the busiest day of the year in Christmastown and it’s time to join some familiar Christmas characters and make some new friends.  Jack Frost, Princess Twinkle and the residents of Christmastown excitedly prepare for Santa’s arrival, however wicked Queen Glacia has a different idea, as she casts an icy curse on Jack!

This winter adventure journeys to the Crystal Cave, through the moonlit forest and into the lavish Royal Palace meeting good-natured goblins, troublesome trolls and magical puppets along the way. Will Jack and his friends save Christmas before Santa arrives?

Don’t miss the sing-along, dance-along, clap-along, snow-filled Best Ever Christmas Show coming to an arena near you. 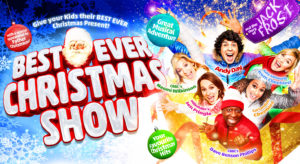 Four stories from the wonderful world of Eric Carle. Live on stage at the Ambassadors Theatre West End for the first time From Friday 2 December 2016 to Sunday 8 January 2017

“When our puppets appear on stage the atmosphere is positively electric – parents and grandparents are swept up in nostalgia, and you can hear peels of laughter and squeals of delight as joy fills the theatre. We can’t wait to bring The Very Hungry Caterpillar to London!” www.HungryCaterpillarShow.com 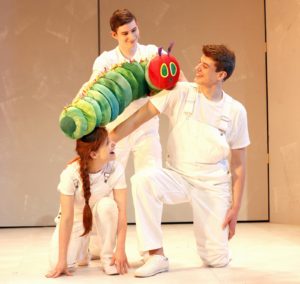 A vibrant storytelling adventure with a quirky urban soundtrack, The Magic Paintbrush is a new dance show leaping, splattering, swirling and boogying onto stages across the UK. The tale of a young person who is given a paintbrush that magically brings paintings to life is given a zingy new energy by choreographer Darren Ellis, whose own dance company Darren Ellis Dance is known for collaborations with companies such as Richard Alston Dance as well children’s shows including Meeting Mr Boom! With a beatboxing-inspired soundtrack and video design accompanying four dancers, The Magic Paintbrush has been created for everyone aged 3+, and will be enjoyed by adults and children alike.

Once upon a time in a grey, colourless world, someone is scribbling. As the young girl paints, her drawings appear on the surfaces of the theatre where they wiggle to life before magically floating out in 3D form. Can our imaginative young artist vanquish the mighty shadow of greed? Inspired ancient and modern versions of the Chinese folktale and exploding with energy, surprises and giggles, this is The Magic Paintbrush as never before.

Peter and the Starcatcher

A play by Rick Elice Based on the novel by Dave Barry and Ridley Pearson Tuesday 29 November to Saturday 31 December 2016 Leading the cast is Evelyn Hoskins (Carrie, Southwark Playhouse; This is My Family, Sheffield Crucible and UK tour; Spring Awakening, Lyric Hammersmith) as Molly, Micheal Shea in his professional stage debut as Peter, Greg Haiste (Nell Gwynn, Shakespeare’s Globe and West End; A Christmas Carol, Royal & Derngate) as pirate leader Black Stache and Dan Starkey (Commander Strax in Doctor Who) as Smee.

In this fantastical and funny adventure, join Starcatcher apprentice Molly as she embarks on a daring mission to stop a precious cargo of stardust from falling into the wrong hands. As well as meeting a very special orphan who helps to solve the mystery of how he became ‘the boy who never grew up’.  www.royalandderngate.co.uk. photo by  IDIL SUKAN 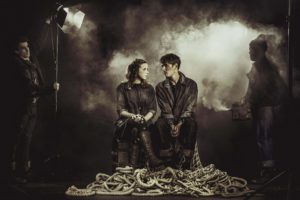 Dean John-Wilson plays the role of Aladdin alongside Jade Ewen as Jasmine in the new musi-cal based on the classic Academy Award®-winning animated film. Broadway cast member Tre-vor Dion Nicholas makes his London stage debut as Genie and is joined by Don Gallagher as Jafar, Peter Howe as Iago, Irvine Iqbal as the Sultan, Nathan Amzi as Babkak, Stephen Rah-man-Hughes as Kassim and Rachid Sabitri as Omar.

Aladdin features the timeless songs from the 1992 animated film as well as new music written by Tony®, Olivier© and eight-time Academy Award winner Alan Menken (Beauty and the Beast, Newsies, Little Shop Of Horrors). With lyrics from Olivier Award and two-time Oscar® winner Howard Ashman (Beauty and the Beast, The Little Mermaid), three-time Tony and Olivier Award, three-time Oscar winner Tim Rice (Evita, Aida), and four-time Tony Award nominee Chad Beguelin (The Wedding Singer), and a book by Beguelin, Aladdin is directed and choreo-graphed by Tony and Olivier Award winner Casey Nicholaw (The Book of Mormon). Tickets are now on sale for performances up to and including 1 April 2017 for individuals and 3 June 2017 for group bookings. For further details please visit www.aladdinthemusical.co.uk

2015 saw English National Ballet’s most successful Nutcracker run on record, when over 73,000 people made a performance at the London Coliseum part of their holiday celebrations. This year’s tour of Wayne Eagling’s version continues the Company’s tradition of presenting a Nutcracker production every year since 1950, its founding year.

On a sparkling Christmas Eve in a frost-dusted Edwardian London, Clara and her enchanted Nutcracker doll discover a magical world where she battles with the Mouse King and meets a handsome stranger. As the air grows colder, Clara and her valiant Nutcracker take a hot air balloon ride across London to the glistening Land of Snow where her adventure really begins.

In a world of Edwardian elegance, Nutcracker brings to life the popular Tchaikovsky score featuring the Dance of the Sugar Plum Fairy and Waltz of the Flowers.

English National Ballet will host a range of workshops and events, aimed to provide a gateway into the world of ballet. Activities include on-stage workshops for all ages, Live Drawing, Family Events, and Behind-the-scenes Talks. Family Friendly performances of Nutcracker are on Tuesday 3 and Saturday 7 January (matinee performances). Times and ticket prices vary www.ballet.org.uk/nutcracker 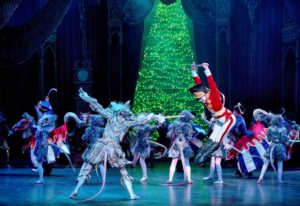 “Sheer theatrical magic. Go see The Snowman and melt” The Times Delighting audiences for 19 hit years, this magical stage adaption of Raymond Briggs’ much-loved book has transported a generation of children and their families into the wintery wonderland of a boy and a snowman that comes to life.

Twinkling with festive spirit, this joyful mix of exquisite dancing, storytelling, enchanting sets, a flying Snowman and live music – including the beautiful ‘Walking in the Air’ – is the perfect Christmas treat for all the family. “Guaranteed to melt the heart of even the most cynical Scrooge” The Guardian 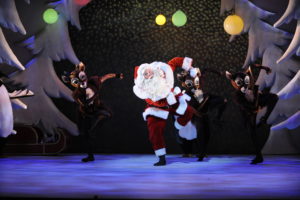 A brand-new Christmas treat in the brand-new Theatre with traditional Bollywood spin! Hot on the heels of the sell-out smash hit successes of Bollywood Cinderella and Dick Whittington Goes Bollywood, comes Bollywood Jack! With more than a Balti full of sparkle and fun mixed with Kipling’s poems,go to Tara Theatre, as they kick off the festive season in style with an East-West culture-clash of glittering costumes, a side-splitting dame and songs that will have you dancing in the aisles! 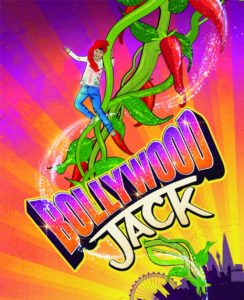 Breaking the IceFilskit. Theatre Company and Unicorn Theatre Stratford Circus, London 19 – 24 Dec various times £8 – £10 https://stratford-circus.com/event/breaking-the-ice Join an Arctic adventure based on the incredible true story of a wild polar bear who made friends with a husky. Follow a story of unlikely friendship and be part of Team Polar Bear or Team Husky as the animals learn to play together. Then get involved in the fun yourself and join in with the Arctic activities before or after the show. 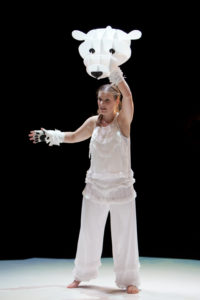 Mimi and the Mountain. Dragon Skewbald Theatre Bloomsbury Theatre, 13 – 31 Dec 11.30 and 3.30 most days£12 & £10 conc High up in the snowy mountains of Switzerland the villagers of Dorta bang their drums, blow their horns and ring the bells to keep the Mountain Dragon away. 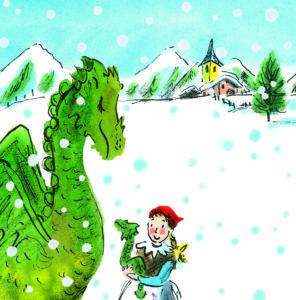 But this year is different. One snowy morning Mimi discovers something extraordinary- a baby dragon sleeping in her woodshed! The little creature is lost and frightened but how did he get there and what happens when his mother comes looking for him?

Room on the Broom Tall Stories. Stratford Circus, London 2 – 18 Dec various times £12 www. stratford-circus.com/event/ the cat purred and how the witch grinned, as they sat on their broomstick and flew through the wind. 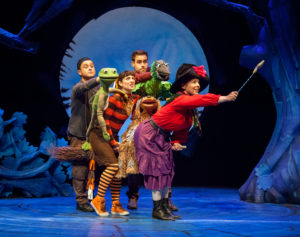 Production photographs for Room on The Broom,KW & NB Ltd, October 2014

The Borrowers Sherman Theatre. Cardiff, Wales 25 Nov – 31 Dec various times £6 – £25 This Christmas the Sherman takes you on another musical family adventure with The Borrowers. Discover the secret world of Pod, Homily and Arrietty, whose lives are turned upside down by a dangerous encounter ‘above the floorboards’.Size doesn’t stop this little family with a big heart. Hide from the ‘Human Beans’, battle with wasps and go on a magical journey that shows the littlest of people can make a big difference. http://www.shermantheatre.co.uk/performance/children/the-borrowers/ 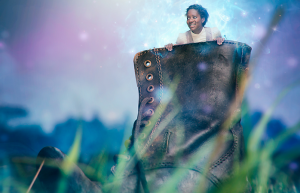