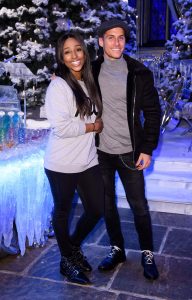 Alexandra Burke in front of the great Hall

To celebrate the festive season, fans and celebrities were able to experience Christmas time at Hogwarts and discover how filmmakers created fire, ice and snow that never melts. With the Great Hall stage decorated as it was for the iconic Yule Ball, the celebrity guests were among the first to see the incredible set dress from the celebration of the Triwizard Tournament as seen in Harry Potter and The Goblet of Fire. 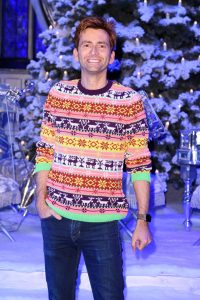 The evening with mulled wine and mince pies as they experienced the makeover first hand – the top section and stage of the Great Hall has been transformed with snow-covered Christmas trees, icicles and an orchestra of magical instruments. The orchestra itself is made up of musical instruments painted by the Prop-Making department to match the silver of the Yule Ball decoration. 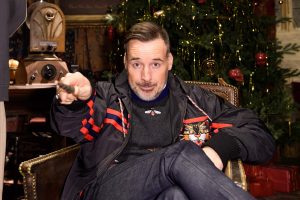 Whilst celebrities enjoyed their drinks, guests were able to view one of the beautiful Yule Ball sculptures which sits in the centre of the Great Hall. The sculpture, which was inspired by the Brighton Pavilion, was cast from resin and surrounded by mounds of imitation ice. 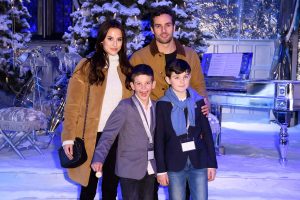 In addition, Alexandra Burke, Candice Brown, Stephanie Pratt and David Tennant enjoyed experiencing the Great Hall lined with Christmas trees and the long dining tables that are dressed as they were for seasonal feasts at Hogwarts with prop versions of roast turkeys, hams studded with cherries and even Christmas puddings surrounded by real flames. 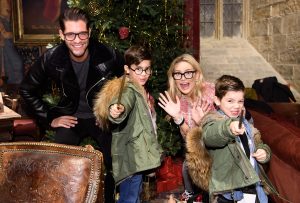 David Furnish, Rebecca Ferguson, Lucy Watson and guests were then able to visit some of the other iconic sets in the tour which have also received a makeover. The Gryffindor Common Room and Boys’ Dormitory were decorated with the original props, featuring  handmade Christmas cards (some of which were created by the cast members during production) as well as enjoying the fireplaces ‘lit’ with special effects fire throughout the Studio Tour, including those in the Leaky Cauldron and the Great Hall.

Hogwarts in the Snow will run from Saturday 18th November – Sunday 28th January 2018. Tickets must be pre-booked and all extra features are included in the ticket price. For more details, please visit www.wbstudiotour.co.uk #HogwartsInTheSnow

Posts related to Hogwarts in the Snow