The Lygon Arms I Cotswolds, UK 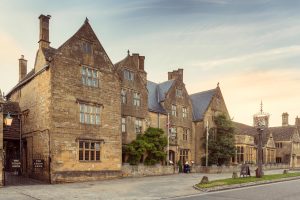 The Lygon Arms, situated within the idyllic Cotswolds village of Broadway in Worcestershire, is a part of the Iconic Luxury Hotels group, a collection of exceptional boutique hotels in Britain. With roots dating back to the 14th century, The Lygon Arms is steeped in history, not only in its superbly restored architecture, but also in its guestbook that has been signed by Oliver Cromwell, Charles I, King Edward VI, King Edward VIII, Richard Burton, Elizabeth Taylor, and many more celebrity and political figures. A celebrated coaching inn, the hotel came into its own as a touchstone for both sides of the English Civil War in 1649. Fit with 86 guest rooms which beautifully capture the rich 600-year history of the property while providing amenities the luxury modern day traveler expects including a relaxing spa, gym, wine bar and restaurant. Here, guests can or enjoy the great outdoors with an array of quintessential British activities offered on-site. Guests invited to experience hands-on activities at The Lygon Arms with the likes of archery, falconry, foraging, walking tours and more. (rooms from £195)

In the chocolate box village of Broadway, the Lygon Arms is an idyllic escape where the whole family can enjoy countryside walks and explore the beautiful Cotswolds countryside. Kids stay free during school holidays and half terms, with plenty of family-friendly activities such as giant games on the lawns, indoor games, and evening movies. Dogs are also welcome at the Lygon Arms, so the furry members of the family can be part of a historic staycation break together. Nearby attractions for the family include Adam Henson’s Farm Park, Cotswolds WildLife Park, or families can stay on-site and swim in the pool or play croquet in the gardens. 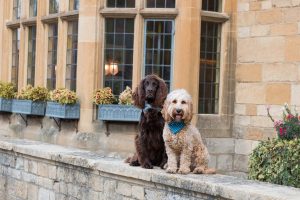 Le Chameau, the crème de la crème of Wellington boots, has partnered with historic Cotswolds hotel, The Lygon Arms, on an exclusive Le Chameau Boot Room and two Le Chameau dog-themed stay packages. A perfect pairing, Le Chameau and their handcrafted rubber boots, have an A-list following of icons of the present (Prince Harry, Kate Moss, & The Duchess of Cambridge…) whilst The Lygon Arms has welcomed icons of the past since the 13th century (Richard Burton & Elizabeth Taylor, King Charles I Suite, Oliver Cromwell…)

1) The NEW ‘Le Chameau Boot Room’ launching mid-November at the Lygon Arms which will consist of:

2) Two Le Chameau dog packages — one which includes a Le Chameau dog bed and ceramic bowl for guests to take home with them and the other, ‘The Ultimate Dog Escape’ (£165) – which is all about treating your four legged best friend to the ultimate holiday and includes: