Drusillas Park in May
DO THE TWIST

Peter Pan with puppetry magic will enchant both young and old alike, the Regent’s Park Open Air Theatre reinvention is captivating. Wounded soldiers of World War One use their imagination as to escape reality. They’re transported to the fantastical lagoons and pirate ships of Never Land, but symbols of the war are never far behind!  Peter Pan launches the Regent’s Park Open Air Theatre 2018 season in the final year of the First World War Centenary Commemorations. 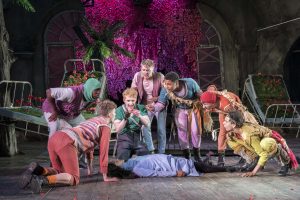 George Llewelyn Davies, later killed in action in 1915, was one of the children who inspired J. M. Barrie to create the iconic character of Peter Pan. Remembering him, and a generation of Lost Boys, directors Timothy Sheader and Liam Steel’s produce a stunning production which is as spellbinding as it is poignant. 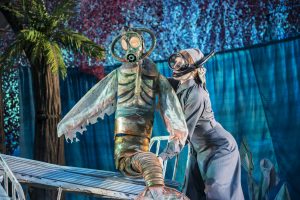 The child in all of us is inspired by the Peter Pan story whether from books, films or theatre one constant is that each time we love the story Great Ormond Street Hospital Children’s Charity also befits. Ever since JM Barrie gifted the rights in 1929. 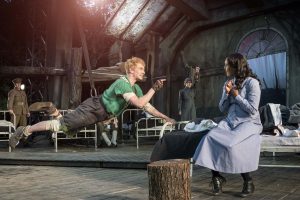 On until15 June 2018, plus lots more to see right up to Sept. From Henry James & Shakespeare to dinosaurs & mean green monster musical –what more could you want?

The English weather can adds a thrilling and unpredictable dimension for the audience, so go prepared and enjoy an outing like no other.