A charming, timely and heartfelt story, THE WORRIES: SOHAL FINDS A FRIEND is the first book in The Worries series, written and illustrated by Jion Sheibani. 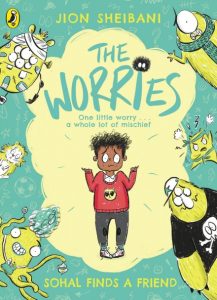 Perfect for children aged 5-8, as well as for families to read together, THE WORRIES: SOHAL FINDS A FRIEND balances hugely fun, child-focused storytelling with a gently important message about not letting your worries get the better of you.

Just over a quarter of children say they feel anxious frequently or all of the time, and this increased by 8% between 2019 and 2020*, making stories about helping children to deal with their anxieties even more important than ever.

Jion’s sparky text is matched by her gloriously fun, accessible artwork, which not only brings Sohal and his worries joyfully to life, in all their anarchic glory, but is presented in a beautiful two-colour format.

Everyone feels worried sometimes. But what if your worries came to life and started following you around? Sohal worries about a lot of things – the dark, mutant sheep, not having any friends – you name it, he worries about it! So one night he draws his worries to make himself feel better – and somehow they look a lot less worrying once he’s scribbled them down . . .
Imagine Sohal’s surprise when he wakes up the next morning, and finds a set of funny furry friends at the end of his bed! His worries have come to life, and it’s not long before Hurt, Fail, Anger, Big and Alone have turned his world upside down. Now it’s up to Sohal to work out how to keep his worries under control – and have some serious fun while he’s at it . . .

Jion Sheibani grew up in Brighton and now lives in Paris with her family. She is a self-taught illustrator and studied English literature at Oxford University. One of her very first jobs was as an intern to Green Party MP Caroline Lucas in the European Parliament, and working on green issues definitely influenced Jion’s first picture book, Lily & The Polar Bears. Jion was a teacher at Sciences Po and ENSAE in Paris before opening her own language school for children. She says: “I hope that The Worries will help other children (and parents!) to think of anxieties as characters to befriend and tame, rather than fear.”