A chance to win a pair of tickets to Olympia International Horse Show, for the Friday evening  16 December 2016

This includes a backstage tour To enter answer this question:
What famous jockey will be at Olympia International Horse Show on Friday 16 December?
Answers by email to: info@parents-news.co.uk with “Horse Show” in subject line and please supply name, address and telephone. number.
Send them in by noon  Friday 2 December 2016
The editor will select one complete and correct entry to be given the tickets.Usual PN rules apply 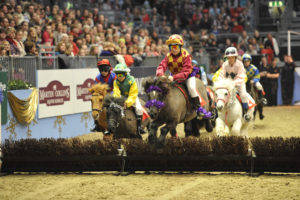 The headliners include the world-renowned equestrian artist, Santi Serra who is set to wow the 90,000 visitors with his Spanish flair and unique performance. Joining him on the centre stage will be the elegant Portuguese Lusitanos showcasing their beautiful skills of horsemanship and harmony. In addition, all the old favourites which make London’s premier horse show magical, such as The Shetland Pony Grand National, The Kennel Club Dog Agility and The Olympia Finale, will be back once again to delight the crowds of spectators attending this year’s show.

Santi Serra has a unique relationship with his animals, who he often refers to as ‘actors’. He communicates with them through mind and body and is able to put on a thrilling show which is filled with tricks and never-before-seen choreography between horse, human and dog. The movements of thoroughbred horses in the wild, the respect for who takes care of and teaches them, the obedience without using force, the friendship… a show that will make you have an unforgettable time. 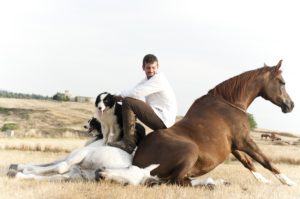 The world-class Lusitano Display is comprised of Portugal’s top 16 stallions and riders, hand-picked to represent their country in this demonstration of traditional Portuguese equestrian skills. The striking horses are mesmerising to watch with their beauty and flexibility emphasised through the breath-taking action packed carousel routine.

Olympia, The London International Horse Show is the ultimate celebration of equestrianism. This year’s headline acts will bring high levels of entertainment for the audience and will complement the world-class competitions in Dressage, Show Jumping and Carriage Driving perfectly.

As well as the displays, audience members will also be treated to the highly anticipated return of the Markel Champions Challenge in aid of the Injured Jockeys Fund on the evening of Friday 16 December, which will feature high profile names such as the legendary Frankie Dettori and reigning National Hunt Champion, Richard Johnson.