Northumberland’s wild and turbulent past features a cast of Roman and Viking warriors, famous kings, notorious princes, Christian monks, loyal English or Scottish soldiers and savage Border Reivers. The rugged Northern landscape and its castles have formed the backdrop to countless hideous and bloody battles. As such it’s a county steeped in history, boasting some of Britain’s finest dramatic heritage sites.

With more than 70 castles – the most in any English county – and of course, the World Heritage site of Hadrian’s Wall www.visithadrianswall.co.uk stretching from East to West coast, it’s the perfect holiday destination to discover Britain’s wild history.

The Wall is set in some of the most stunning scenery in the British Isles and is dotted with English Heritage sites www.english-heritage.org.uk, where you can get very close to our Roman past.

Housesteads Roman Fort www.english-heritage.org.uk/visit/places/housesteads-roman-fort-hadrians-wall/ is the best preserved of all the forts on the wall, with ruined barracks hospital, interactive museum and the best preserved Roman toilets in Britain which still “flush” when it rains!

Kids can get in touch with their inner Roman soldier during the summer holidays from Mon 27 to Fri 31 July at English Heritage’s Birdoswald Roman Fort. How to be a Roman Solider, features games, drills and crafts, plus the chance to dress in Roman clothes and touch genuine Roman artefacts. (£5.80 adults, £4.40 children) http://www.english-heritage.org.uk/visit/whats-on/how-to-be-a-roman-soldier-Bir-27-07-2015/

On Saturday 5th September at Housesteads, you can share the night time experiences of a Torch lit Patrol of Roman soldiers here (£7.50 for adults, £5 for children). On Saturday 5th and Sunday 6th September, Tales from the Wall will feature costumed storytellers who share tales of life on this outpost of the Roman Empire (adults £7.50, children £5).

The rugged Northumberland coast was under frequent attack from marauding Vikings and Holy Island took a major battering. English Heritage’s Lindisfarne Priory www.english-heritage.org.uk/visit/places/lindisfarne-priory/. In Viking Lives and Times from Sat 18 July to Mon 20 July you can learn about Viking life and hear tales of terror and turmoil about the Viking raids on the North East coast of England, where Lindisfarne was first to be set upon in 793 AD.

Just down the coast you’ll find Bamburgh Castle www.bamburghcastle.com  often called the best view in Britain. Set on an outcrop of volcanic rock and covering nine acres, it was once home to the rulers of the ancient Kingdom of Northumbria. You’ll find plenty of activities for adults and children, from live archaeological excavations such as Living History with St Cuthbert’s Land on July 11th and 12th to visits by medieval archer Rusty Bodkins throughout the summer. 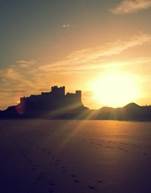 Bamburgh is an inhabited castle, but there are plenty of stunning and mysterious ruins in Northumberland too. English Heritage’s Dunstanburgh Castle near Craster is set on a remote headland. Built in the 1300s and once owned by John of Gaunt, it came under siege twice during the Wars of the Roses and was left to fall into ruins.

Etal Castle, which also dates to the 14th Century, was a defensive outpost against the Scots and fell to the Scottish King James IV in 1513 – just before he lost his life at nearby Flodden Field. There’s a great exhibition here where you can find out about the bloody cross-Border warfare www.ford-and-etal.co.uk

Prudhoe Castle in the south of Northumberland was the only one in the county that managed to repel the invading Scots when it survived two sieges in the 1170s. Now it too is a majestic ruin.

Warkworth Castle www.english-heritage.org.uk/visit/places/warkworth-castle-and-hermitage/ overlooking the River Coquet, played a key role in the English-Scots conflicts and was home to Harry Hotspur, immortalised by Shakespeare. This summer, the castle will be celebrating the 800th anniversary of the Magna Carta. Warkworth’s Lord John FitzRobert was one of the signatories of the historic document. On June 13th and 14th and August 18th and 19th, a fun play will look at its importance and its importance in the 21st Century. (Adults £6, children £3.50).

Warkworth will also be remembering its role in the Wars of the Roses, when it was sized from the Percy family by the King in 1464. Soldiers of the Roses takes place on July 28th and 29th and August 4th, 5th, 25th and 26th where you can discover the deadly weapons used in the period and how the ‘barber surgeon’ dealt with casualties. It’s also the setting for a spectacular Medieval Tournament from August 11th to 14th. (Adults £6, children £3.50).

English Heritage’s Belsay Hall, Castle and Gardens  /www.english-heritage.org.uk/visit/places/belsay-hall-castle-and-gardens/ is also staging a Knight’s Tournament over the Bank Holiday weekend of August 29th to 31st. It’s just one of the historic activities throughout the summer at the site, including a a chance to try archery on June 28th and the fabulous Hands of History Crew: Go Medieval which runs from July 27th to 28th August and features everything from medieval dressing up – including a mini suit of armour – to dancing and sword fighting skills.

These are just a few of the wild Northumberland history events this summer and to take full advantage of everything that’s on offer, you really need more than a day or two in the county.

Northumberland Coast and Country Cottages www.northumbria-Cottages.co.uk has a choice of fantastic self-catering cottages; and the Lindisfarne Inn www.lindisfarneinn.co.uk  at Beal is perfectly positioned to start looking for your Viking roots!

If you’re seeking a wild and wonderful holiday, you won’t be disappointed by the sheer variety of wildlife that are native to the moors, hills, woodlands and coastline of arguably England’s most stunning county.

Northumberland National Park is England’s least populated national park and covers more than 400 square miles of wild terrain, dotted with nature reserves and visitor centres. And what it lacks in human inhabitants, it more than makes up for on the wildlife front, with otters, black grouse, rare wild goats and majestic ospreys making their home here.  www.northumberlandnationalpark.org.uk.

The Park is also home to a herd of wild Cheviot goats, which are believed to be descended from the goats originally kept in Neolithic times. The 150-strong herd can be spotted around Yeavering Bell in the Cheviot Hills – which literally means ‘hill of the goats’ – and is Northern England’s biggest Iron Age hill fort.

Kielder Water and Forest Park www.visitkielder.com, (England’s Best Tourism Experience 2013), lies within Northumberland National Park and stretches for 250 square miles. You’ll find some real treats at Kielder, including the opportunity to observe ospreys in the wild. This rare bird of prey returned to Kielder in 2009 for the first time in two centuries and in 2014, three breeding pairs set up home in the park. Osprey Watch 2015 takes place in May and June, where visitors can watch the nests through powerful telescopes and discover more about these fantastic birds of prey.

The ospreys are among the Kielder Super Six species that visitors most want to see. The list also includes red squirrel, pipstrelle bats, roe deer, salmon and otters. Otters can be spotted from the hide at Bakethin Nature Reserve and there are a number of sites in the park, including Leaplish Waterside Park and Kielder Castle Visitor Centre, which are particularly good if you want to see red squirrel. Northumberland National Park is also the last major stronghold in England for this shy, russet coloured mammal and it is home to around 50 per cent of England’s red squirrel population.

Red Squirrel mornings are held regularly at Kielder. Children and accompanying adults are taken on a guided short stroll to look out for signs of red squirrels and visit the wildlife hide, where hopefully they will see the cheeky creatures feeding! Children can create their own red squirrel mask to take home. Prices are just £2.00 and £3.00 for Red Squirrel Mornings.

The county is of course famous for its amazing coastline line too, and if you watched the recent ITV1 series More Tales from Northumberland, you’ll know about the huge variety of bird and aquatic wildlife around the Farne Islands. Whether you want to see puffins, grey seals or hope for a glimpse of white-beaked dolphins, harbour porpoise or possibly even a minkie, humpback or killer whale, there are a number of boat trips you can take from Seahouses Harbour with Serenity Farne Islands Boat Tours. They sail all year round to the Farne Islands and offer different trips throughout the year from landings, photography trips, and whale watching to seal trips. They also have an on-board wildlife guide to help you identify all the different varieties of birds and sea creatures you will spot.

Prefer to stay on shore for your Northumbrian wildlife spotting?  Head out with Northern Experience Wildlife Tours for an expert guide to bird and animal life, including the elusive otter, either in a group or a prestige tour for two www.northernexperiencewildlifetours.co.uk.

Alternatively book a guided walk with Birdwatch Northumbria for a fascinating, in-depth and enthusiastic exploration of species such as black grouse, goshawks and peregrine falcons www.birdwatchnorthumbria.co.uk

The sheer breadth of possibilities in Northumberland means you need more than a day trip to do these wild and wonderful opportunities justice. The county is home to top quality accommodation providers, whether you are looking for a hotel or comfortable self-catering.

The Bamburgh Castle Inn www.bamburghcastlehotel.co.uk  overlooking the harbour at Seahouses is ideal if you are heading out to the Farne Islands; the Lindisfarne Inn www.lindisfarneinn.co.uk at Beal is perfectly positioned at the start of the causeway to Holy Island; and The Hogshead Inn in Alnwick www.hogsheadinnalnwick.co.uk is a fantastic starting point to explore the inland wildlife spotting opportunities.

Northumbria Coast and Country Cottages www.northumbria-Cottages.co.uk  can provide superb holiday cottage accommodation throughout the county. If you’re an avid birdwatcher, check out Kittiwake Cottage on the edge of Budle Bay near Bamburgh coast www.northumbria-cottages.co.uk/property/kittiwake-cottage

You can always be confident of finding welcoming, cosy and comfortable accommodation in Northumberland after a day out on the wildlife trail.

For more information on any of the above, please go to www.visitnorthumberland.com

Autumn half term fun at Kielder