Former World Cup winner Mike Tindall found retirement a struggle at first. Nowadays he’s working on his golf game, and doing his part to emulate his famous Royal family-members in using sport to give something back to the community through the ISPS Handa Celebrity Golf Classic… 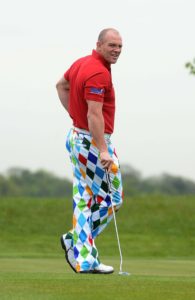 As a former England Rugby captain, and World Cup winner, when it came to retirement, Mike Tindall’s newest role as the face of ISPS Handa’s Celebrity Golf Classic was a step in the right
direction for the feared former Number 12.

“You don’t have that law and order in terms of where you’ve got to be at a certain time, and you do get used to it, but it takes a little bit of time,” explains the 37 year-old, who called time on his career in 2014, “You go through a period where you feel like you have to fill the time, so you say yes to a lot of things you wouldn’t normally say yes to. You just want to fill your day so it feels like
you’re actually doing something.”

Two years down the line and Tindall is beginning to settle into the rhythm of retired life. He has even continued to add to the latest chapter of his sporting life, swapping the mud and blood of a rugby pitch for the more therapeutic atmosphere of a golf green.

Tindall’s golfing legacy goes much further than just his 10 handicap, however. The ISPS Handa Mike Tindall Celebrity Golf Classic will see a multitude of prominent faces take to the Belfry course to raise money for Rugby for Heroes, and the Matt Hampson Foundation.

“It was when I had retired, and golf was something I’d always wanted to get into,” he explains, “I go to a lot of golf days – so I thought I should do one myself.”

Now in its fourth year, the Celebrity Golf Classic offers Tindall “a good chance to see people who I’ve met through various things – be it rugby or TV – and get them all out, have a fun day and try
to raise some money.”

Aside from his past as national captain, Tindall has also become close to another British institution – the Royal Family, by virtue of his marriage to Zara, granddaughter of the Queen and Prince Philip.

Despite the fact official duties at “the Queen’s official birthday and Royal Ascot” will mean he is unable to travel Down Under to follow England’s upcoming tour, Tindall has nothing but praise for his famous family-members, especially Harry’s role in the organising of 2016’s Invictus Games.

“It’s a credit to him, what Harry’s done,” he says, “You know the time it takes, and having been in the military and served in that way it’s ingrained in him and it’s ingrained in a positive way. He has the power to bring a lot of people, a lot of countries, together and give these guys the ability to compete. Having worked with a lot of ex-servicemen through charity stuff like Rugby for
Heroes, and the On Course foundation, that’s all they want.”

Have the Princes felt the full force of the man once affectionately known as ‘The Fridge’ on the sports-field yet, however?

“I think they purposefully avoid competing against me, they must not like losing or something,” he smiles, “I know they play football every now and again at Christmas time, but I’ve never been able to get up there early enough to play with them. Someday I’ll do it, and I’ll take great pleasure in taking them down.”

The ISPS Handa Mike Tindall Celebrity Golf Classic, supported by Artemis, is in aid of the Matt Hampson Foundation and Rugby for Heroes this Friday 20th May at the Belfry Hotel & Resort in the West Midlands.