The makers of a revolutionary new invisible spray paint claim it will help to save the lives of thousands of cyclists and pedestrians. The Albedo100 spray is invisible to the human eye but is highly reflective of headlights during darkness and can be applied to clothing or a bike frame. 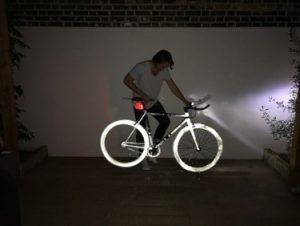 Its creators believe it could mark a major breakthrough in road safety by making thousands of road users highly visible to motorists at night. It utilises cutting edge technology which allows the spray to be completely invisible in daylight yet remain weatherproof to ensure effectiveness in heavy rain.

It was developed in Sweden but is now available in the UK. The number of pedestrians killed on British roads increased by 11% during 2017 with 470 pedestrian fatalities and 101 cycling deaths. Figures released by the Department for Transport revealed that pedestrians and cyclists are the most at risk of death or serious injury on Britain’s roads, particularly during busy periods.

Almost half of the 23,805 pedestrians injured on our roads during 2017 were due to accidents which happened between 3:00pm and 7:00pm, with nearly 5000 of these being children aged up to 15. Children are particularly vulnerable when using the roads as pedestrians during the winter months when they face a journey home from school in the dark now the clocks have gone back. The team behind the innovative new safety spray Albedo100 claim their product could help save thousands of lives by making road users much more visible at night.

By spraying the product onto clothing such as a coat or hat, or onto a bicycle frame, pedestrians and cyclists instantly become highly reflective when out in the dark. A person wearing the spray can be seen from up to 500 feet away when light hits it, a significant improvement in visibility when compared to someone wearing bright clothing, who can only be seen from around 200 feet away.

This increased illumination can help reduce the numbers of night time accidents on our roads as drivers are able to spot pedestrians and cyclists much earlier and take appropriate evasive actions. The highly reflective spray can be used on almost all materials and textiles, helping adults and children stay clearly visible on Britain’s roads and pavements. A spokesperson from Albedo100 said: “We believe our product is a major breakthrough in road safety which can help save the lives of thousands of UK road users over the coming years.

“Anything that makes vulnerable road users more visible to oncoming traffic has to help reduce the number of accidents on our roads. “The official figures show just how vulnerable pedestrians and cyclists can be and particularly so during the winter when it can get dark as early as 4pm. “Many children are out using roads at this time on their way home from school and Albedo100 can help make sure they are easily seen by on-coming traffic. “Cyclists too are particularly at risk but they can make themselves much easier to spot if they spray their bike or coat with Albedo100. “We are excited to be launching this innovative new product in the UK and we are looking forward to helping to protect the lives of children, cyclists and other vulnerable road users.”