Competitors from around the world are heading to Arundel Castle this month to vie for the prestigious Order of Arundel at the spectacular Jousting and Medieval Tournament (25-30 July) – the pinnacle of the Castle’s events calendar. 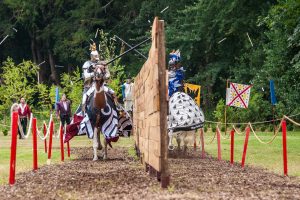 The gruelling six-day tournament, which is the longest of its kind in the world, will see representatives from England, France, Norway and Poland face off in a thrilling battle of strength, skill and nerve.

With rivalries as fierce as ever as the competition enters its ninth year at Arundel Castle, visitors can expect edge-of-their-seat excitement from the off as competitors mounted on horseback and clad in gleaming full plate armour lead an action-packed programme.

Played out in the shadow of the mighty Castle, Arundel Castle’s Jousting and Medieval Tournament is the only competition of its kind in the country. The jousters are required to wear full plate armour, in-keeping with the 15th century authenticity of the event. This is no mean feat, as the armour can weigh on average 25-35 kilos.

The jousters cannot defend themselves while they focus on striking their opponent, they have to rely on the quality of their armour to protect them. The competitors must also be mindful of damage to their armour, as any repairs or adjustments required will be made in real time in the site’s tented encampment during the event.

As an added challenge, each jouster will only meet their steed for the contest in the moments before their first joust, and will rotate through a selection of horses throughout the week, as a true test of horsemanship. The 14 beautiful horses are specially trained for jousting, and will navigate the tilt rail with equal amounts of speed, precision and grace.  With horsemanship being measured as part of the competition, striking up a successful partnership with their mount will be almost as important as striking their opponent!

Reaching combine impact speeds of up to 35-45mph

Jousting is not for the faint hearted, but promises an awe-inspiring visual spectacle for spectators.

After months of intense preparation, each competitor will be hoping to secure both individual and team victory – none more so than the two female jousters, Alison Mercer and Bente Andresen, who are joining the field for the first time this year representing the England and Norway respectively.

France will also be hoping to change its fortunes, as despite competing in all nine tournaments at Arundel Castle, it is yet to emerge triumphant.

In addition to the action at the tilt rail, visitors will also be able to enjoy more activities than ever before including daring hand-to-hand combat challenges, craft displays, ancient cookery demonstrations, storytelling and have-a-go archery.

Bryan McDonald commented: “What an exciting week we have in store for our visitors during the Jousting and Medieval Tournament! This year is our biggest jousting event to date – and I am certain it will also be our best.

“The eight talented competitors have travelled from all over the world to take part in this tournament, so they will be giving their all in every challenge they face. I look forward to seeing great rivalries play out at the tilt rail and hearing roars of support from the audience, of course!”

For more information on Arundel Castle and its events calendar, or to purchase tickets for the Jousting and Medieval Tournament, including access to the event, Castle and Gardens, please visit: www.arundelcastle.org.

Posts related to Joust the Ticket!

Who will be crowned the Champion of Champions this summer at Arundel Castle?