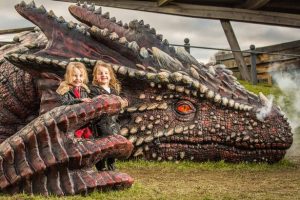 Dragons feature bigger than ever in the new season of Game of Thrones and it’s no surprise that these majestic creatures have become the stars of the show. Luckily, families and fans don’t need to travel to the series’ mythical continent of Essos but simply head to Wales to see dragons close-up, including two new baby dragons which ‘hatched’ this summer. 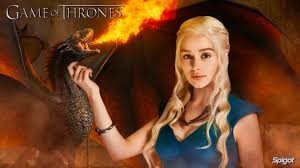 Just in time for the school holidays visitors can meet the giant animatronic ‘dragon family’ made up of daddy dragon Dewi, mummy dragon Dwynwen and new additions, baby dragons Dylan and Cariad, known for being adorable but VERY mischievous.

Daddy Dewi, the red and black dragon enthralled more than 120,000 visitors in a tour of Wales last year and found fame after breaking the banks of Caerphilly Castle on St David’s Day 2016. Mummy Dwynwen is named after the Welsh patron saint for love and is known for her gleaming, pearlescent purple scales.

On May 26th this year, baby dragons Dylan and Cariad hatched and the public were able to watch the ‘birth’ online as it was streamed from Caerphilly Castle in South Wales. Now, the happy dragon family will head northwards to three different castles around Wales, starting with Kidwelly Castle in Carmarthenshire throughout July, then on to Harlech Castle in the west and Beaumaris castle in the north in August. 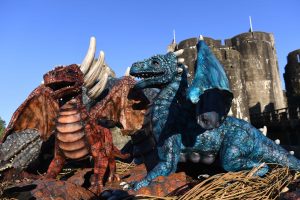 Dewi and Dwynwen, who have been carefully watching over their eggs in the grounds of Caerphilly Castle, have welcomed two beautiful baby dragons into the world.
© Cadw, Welsh Government (Crown Copyright), all rights reserved

The baby dragons’ arrival is part of an event-packed Live the Legends campaign, which is bringing Wales’ dramatic sites and stories to life during Visit Wales’ 2017 Year of Legends. The fascination with dragons among Game of Thrones fans and their mythical heritage started in Season 1 with the hatchling of three magnificent dragons, Drogan, Viserion and Rhaegal.

Interest this summer has piqued with the release of the latest series, where chief dragon Drogan has been enhanced by outstanding CGI special effects and heads up a terrifying ‘dragon army’.

In contrast, the super-realistic Welsh dragon family are cast out of fibreglass, weigh a whopping three tonnes in total and were created by a team of 16 at Cardiff-based prop design specialist, Wild Creations.

Dragon’s Head (Worm’s Head) in Rhossili – Swansea Worm’s Head in Rhossili on a clear dayWorm’s Head, Rhossili, Swansea Bay. Technically Worm’s Head in Gower looks more like a worm, BUT its name comes from the Viking word for dragon: ‘wyrm’ – plus, you’ll be rewarded with spectacular views of Rhossili Bay, one of the finest views in Wales.