Safety of Children in Sport
Stay Away From Acne In Adolescence

Not many of us can say we have escaped the nightmare that is sibling rivalry, either personally or with our own children.  As a child, I remember my older sister being fiercely protective of me one minute and hating the sight of me the next.  In return I would hit her with a tennis racket and try and sell her my Sindy case (for an inflated rate of course)!  Amongst my own friends such stories are quite common – and in many cases, far worse.  Then suddenly the wheel turned, and I found myself having to restore harmony to my own household.  This was no mean feat, and I often wonder to myself ‘where did I go wrong’? 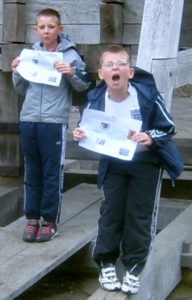 Being a mum of four there were always going to be conflicts and I was prepared for that.  What really hit me hard was the pure venom that goes with these ‘power struggles’.  Suddenly I would find I had two Neanderthal savages in the house, both vying for ‘alpha male’ status – until they stopped talking to each other completely that is.  Then they just took to beating their chests and circling round each other, with my husband doing the same.  Thank heavens for my daughter.  Her only competitor in the household was me and obviously I reigned supreme!  As for my youngest, another boy, he just took it all in, pondered on it and worked out that it really was not worth the grief.  Clever boy! This went on for years, and I tried everything to encourage them to get along but to no avail.  Often the guilt at having ‘failed ‘them would be overwhelming.  My friends would constantly say ‘my sister and I hated each other when we were little, but now we get on really well.  Don’t worry, they’ll be fine’.  I would nod and smile, while secretly thinking ‘can’t see that happening in a million years’.  So I ploughed on, pushing them together, giving them their own space, etc. etc.  Nothing worked.  I have now concluded that fundamentally they just do not like each other and maybe never will.  Who was it that once said ‘you can pick your friends, but you can’t pick your family?’ In the case of my boys, they were absolutely right.

The boys are both a bit older now, one has just started university, the other is due to go this year.  Perhaps the distance between them will help them reunite.  I really hope it does, but that is a journey they will have to decide to make, not me.  They will always be ‘my boys’ but they are both fully grown now, and have to learn to find their own way.  Perhaps they will start to realise that that their brother really isn’t that bad.  After all, we all live in hope!    As far as my parenting goes, I have realised that you can only ever do your best, try your hardest and keep your fingers crossed. There is no magic solution, no instant fix.  There is only life – and we all have to learn to live with that the best we can.

Encouraging Learning in Children with Dyslexia