A Girl’s Guide to Being Fearless
Primigi Competition

Celebrated academic Dr Ian Cunningham invented Self-Managed Learning and founded the revolutionary SML College, which boasts zero bullying or truancy and a 100% success rate of sending its pupils on to full-time work (including doctors, film makers and engineers) or further education. 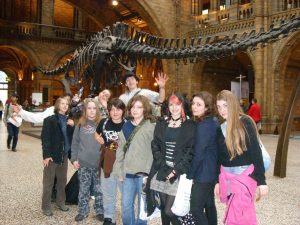 It has no classrooms, no imposed curriculum, no lessons and no ‘teachers.’

He has 40 year’s research, insurmountable evidence, theory and practice to prove the causes and consequences of bullying in schools and how his model prevents this. He is currently fighting for urgent changes to our current school system, which is failing us, because it has barely changed since the Victorian era, and insists his 21st century approach is the optimum solution.

Self Managed Learning College allows students to choose their own studies, which they can learn in any manner they like – there are more than 57 ways – and only requires them to be present in the mornings, giving them time to enjoy their own activities.

He said: “In 20 years of SML College, we have had zero instances of bullying – any organisation that isn’t down to zero bullying is failing people. Yet bullying is endemic in the school system. A survey published on 20 Sept showed that 46% of school children had experienced bullying. One in 10 children said they had felt suicidal due to bullying; one in seven had changed school or turned to home schooling due to bullying.

We have seen a 50% increase in applications from parents since lockdown, partly for this reason. A young person experiencing traumatic bullying at school is significantly more likely to suffer psychosis in adult life than those who have not experienced bullying.

Schools cause mental health problems for many children and a series of surveys showed a reduction in anxiety for many students during lockdown and improvements in mental health away from the pressures of homework and bullying.”

This, along with the College’s regular ‘community meetings,’ where problems or issues are openly discussed, has enabled them operate a zero-bullying college and protect the mental health of their students.

Dr Cunningham says: “The necessity of smaller schools has long been recognised in research, but it’s not just to enable a better learning environment – it’s also better for the mental health of students.

“Research shows that the current education system adversely affects the mental health of many children, and yet nothing is being done to rectify that on a national level. Bullying is endemic in most schools – especially secondary schools – because most of them have more than the maximum size of 150 people required to function as learning communities.

Young people who have experienced traumatic bullying at school are significantly more likely to suffer psychosis in adult life. Here at SML College, we ensure our students are happy, healthy and prepared for life. Any school system not delivering that is failing young people.”

Dr. Cunningham’s SML methods are becoming so popular across the globe that he has been invited to implement the methods at some of the world’s biggest organisations`, including British Airways, the BBC, Barclays Bank, EMI, Nike, Virgin, WH Smiths, Ericsson, Nestle, the NHS and Tottenham Hotspur FC, among others.

“People always say that schooling is important in order to get a job in later life,” he says. “So when major companies are asking us to bring SML to their workplaces, it would seem there’s no better learning approach to help youngsters break into – and adapt to – the working world.”

‘All Different, All Equal’